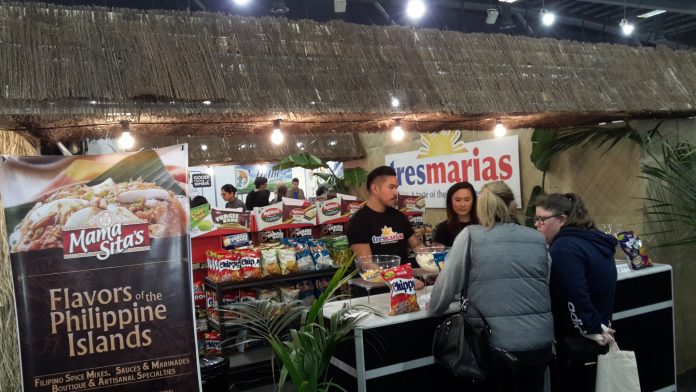 “The world is my kitchen,” said sauce tycoon Clarita Reyes-Lapus, the head of Marigold Manufacturing Corporation, which was established in the 1980s and manufactures more than 100 condiments that carry the Mama Sita brand name. “I have been to over 65 countries pushing Filipino food cooked with MMC’s products.”

AUCKLAND – The Mama Sita brand is a household name in the Philippines. Some commentators have even described this iconic local brand as the Pinoy equivalent of condiment market leaders such as Heinz, Knorr, Kikoman or Lee Kum Kee for Filipino families living abroad.

In an effort to introduce Filipino food and flavours to other nationalities overseas, MMC has been bringing the Mama Sita line of ready-to-use sauces to food shows around the world.

In July this year the company took centre stage in the Tres Marias Trading’s stand at the Auckland Food Show. Tres Maria Trading, the leading importer of Philippine products in New Zealand, participated in the Auckland Food Show for the first time to bring the taste of the Philippines to the traders and consumers who visited this premier food event. Besides the Mama Sita line of products two other popular brands were featured at the TMT stand – Red Horse, the market leader in Philippine beers made by San Miguel Brewery and snack food giant Rebisco’s wide range of products.

In an exclusive NZ interview with Filipino Migrant News at the Auckland Food Show, Clarita Reyes-Lapus introduced some of the new products the company is planning to launch internationally. “I came here to grow the market,” said Clarita. “We heard that at this show we can reach an international market – besides the locals, international visitors also come for the show.”

According to Clarita Sinigang is their number one product here in New Zealand. Then comes Caldereta, Adobo, Palabok and Tocino. “We launched four new products at the Auckland show. The all natural Labuyo – a hot pepper sauce and three other marinades. The new fiery BBQ marinade is seasoned with labuyo – it is a spicy dipping marinade, so you just dip and grill.” The MMC marketing team also did some sampling of the yet-to-be-released all natural Champorado.

“We are on a mission to bring Philippine flavours to the world. Our Kare-Kare mix sold like hotcakes overseas because of the convenience of preparing this dish. It is a lot of work to roast the peanuts and prepare the sauce from scratch.

“In a night market in Vienna our BBQ Marinade was a big hit. In Pakistan our MS Oyster Sauce is the largest selling oyster sauce brand; even though all over the world the oyster sauce market is ruled by China.

“At one time it was nearly impossible to cook sinigang using real green tamarind pulp in the US. But nowadays Filipino migrants can cook it every day at home using Mama Sita’s Sinigang Tamarind Soup Base.”

MMC has two agents for its range in New Zealand – Lim Brothers and Tres Marias.

CONDIMENTS THAT ADD SPICE TO LIFE

AUCKLAND – Food is part of our ‘diaspora nostalgia’, as one food writer described the elemental obsession for a reminder of home. These days sorely missed Filipino delicacies can be whipped up at home conveniently with ready-to-use sauces and mixes like the Mama Sita range, which is available in Filipino stores in over 65 countries.

According to the Business Mirror exports constitute 50% of the business of the Marigold Manufacturing Corporation, a company established in 1980 to produce sauces to make homestyle Pinoy recipes like kare-kare, palabok and sinigang.

Clarita Reyes-Lapus is the head of Marigold Manufacturing Corporation, the 50-year-old company which manufactures the 106 condiments that carry the Mama Sita brand name. She is the daughter of the founder – Teresita ‘Mama Sita’ Reyes.

“When my mother travelled abroad she pitied all the Filipinos who were just eating hot dogs, so she would cook Filipino food for them. They could enjoy her cooking long after she had gone as their freezers were full of the dishes she made. The children of the migrants would cry when Mama Sita was leaving.”

The apparent need for ready-made sauces and mixes for kababayan overseas led to the pioneering development of over 106 products under the Mama Sita brand name.

“My grandfather started the Aristocrat Restaurant at the beach resort along Manila Bay 82 years ago,” added Clarita. The restaurant promotes itself as the ‘home of the best chicken BBQ in town’.

MMC also publishes a series of cookbooks on new and traditional Filipino recipes for home cooks. They donate some cookbooks to libraries and schools in the Philippines and abroad.

On October 23rd a representative of MMC will be in Auckland for a book launch and commemorative stamp donation at the Panmure Community Library. MMC will present to the Panmure Community Library Mama Sita’s cook books and a Special Centennial edition book, ‘What Kids Should Know About Filipino Food’ and will hand over Mama Sita’s commemorative stamps in recognition of Teresita ‘Mama Sita’ Reyes’ contributions to the enrichment of Philippine Cuisine.