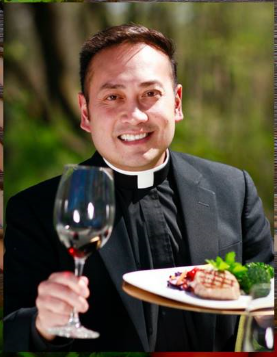 The American (Filipino-born), who travels the world sharing the importance of family dinners, delighted attendees with a live cooking demonstration, while at the same time sharing biblical truths such as ‘knife’ being the double-edged sword of the Bible.

In the afternoon session the audience was treated to a live martial arts demonstration from the third degree black belt instructor, as he explained aspects of spiritual warfare.

Renowned New Zealand chef Martin Bosley also spoke at the event about his culinary journey and his charity work with prisoners called Prison Gate to Plate. People were then able to taste the gourmet pasta meal prepared by prisoners from the Rimutaka prison at the charity event hosted by the Centre for Marriage and Family (CMF).

CMF director Patrica Sison said: “As chefs, both Fr. Leo and Martin Bosley are involved in the very important work of helping prisoners out of a life of recidivism. Fr. Leo is a multi-talented man with a deep prayer life and it shows in the ways that he is able to relate faith to food and other aspects of life and communicate deep spiritual truths – much the same way that Jesus did through his parables.”

It was Fr. Patalinghug’s first visit to New Zealand and audience members are already asking about his next trip.

Fr. Patalinghug is also an award-winning author, radio and TV show host. He is also the founder of Plating Grace, a movement to bring families back to the dinner table. He said that it is important to sit down at the table and have dinner with one’s children. “It’s good for them and will make them better people,” he said.

For Fr. Patalinghug, the simple act of creating and sharing a meal can strengthen all kinds of relationships. He said: “We believe in the power of food to do good – for all people, no matter their backgrounds – as food is the common denominator that can bridge people and culture.”

He lives in a consecrated community called Voluntas Dei (The Will of God). He hosts a weekly TV show called Savouring Our Faith on the Catholic Channel EWTN.

Patrica Sison is the director of the Centre for Marriage and Family. Article first appeared in NZ Catholic.