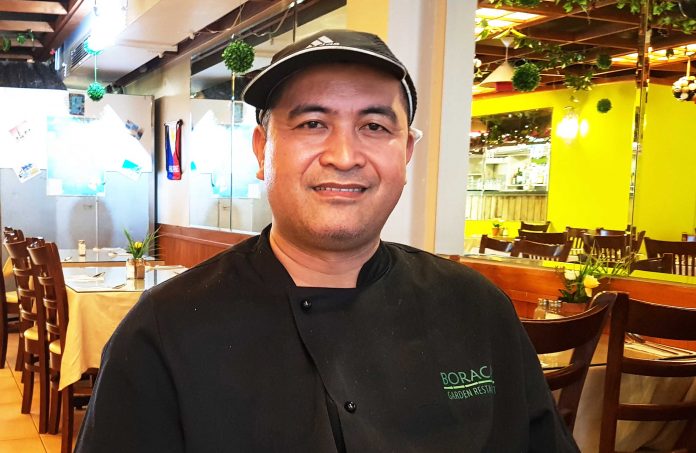 Today Pinoy chefs can be found working almost everywhere – in fine dining restaurants, cafes, ethnic eateries and some have even launched their own successful food businesses. One Pinoy superhero, Leo Fernandez, was even chosen as the runner up in the MasterChef New Zealand contest (see story below).

Pinoy chefs are making a name for themselves in New Zealand and the Filipino Migrant News ‘Pinoy Chef of the Year Award’ goes some way towards acknowledging and celebrating the talent and skills of this group of unsung heroes in our community.

Some of our top Pinoy chefs battled it out to vie for the prestigious title – FMN’s 1st ‘Pinoy Chef of the Year 2014’. This event was held together with the FMN’s Independence event that was filmed for TV3’s ‘Festival’ program.

In the end it was Darrow Benito with his Pinikpikan dish that impressed the judges – Eduardo Viterbo, Director of the Quality Restaurants Group and Tina Raines, an Asian food writer.

In 2015 FMN awarded the title ‘Pinoy Chef of the Year’ to someone who went out of his way to promote his love of Filipino cuisine to Kiwis on national TV and in the process may have jeopardised his chances of taking out the title ‘MasterChef New Zealand 2015’. He missed out on winning the crown by just two points.

For seven weeks Leo Fernandez, 36, made Filipino food the flavour of the month for viewers of TV3’s cooking contest. He made it a point to introduce popular Filipino dishes over the course of this action-packed reality show.

You could say that it was a gutsy move to introduce food that was unfamiliar to the judges, contestants and the majority of viewers. In the finals of the contest the desire to remain faithful to the original recipes may have been his Achilles’ heel.

“It was a challenge with comfort food,” Leo recalls. “When they said comfort food I had no hesitation in making Arroz Caldo. But the judges may not have appreciated the technique and the flavours that I put in my dish. It’s always a risk making something that I have grown up with.

“I guess I opened the door for the Filipino community to consider becoming MasterChefs. Anyone can do it.”

Leo is now the co-owner of the Melting Pot Café in Panmure, Auckland.

Vicente ‘Boyet’ Deloterio is a 46 year old chef from the Philippines who is head chef in Auckland’s famous Boracay Garden Filipino Restaurant.

According to his employers Boyet is a rare talent who can cater to the palates of the local demographic while at the same time preserving the authenticity of traditional Filipino dishes.

It is no surprise that Boyet can capture the unique identity of Filipino cuisine as he has been honing his skills in the culinary arts since he was a teenager.

Boyet’s selflessness and humility is inspiring and makes him worthy of being recognized as a hero among his fellow Filipino-Kiwis.

Editor – Located in the Viaduct Harbour area, the Boracay Garden Restaurant appeals to more discriminating Filipino diners. And a clear indication of its success is the fact that other nationalities are starting to come through the door to try Filipino cuisine. The Boracay has an extensive menu – Inihaw na Bangus (whole) and Sinigang na Baboy are top of the pops. Then there is Sizzling Sisig, Beef Steak Tagalog, Lechon Kawali, Tinola, Bicol Express and much more.

Mama Sita: ‘The world is my kitchen’.