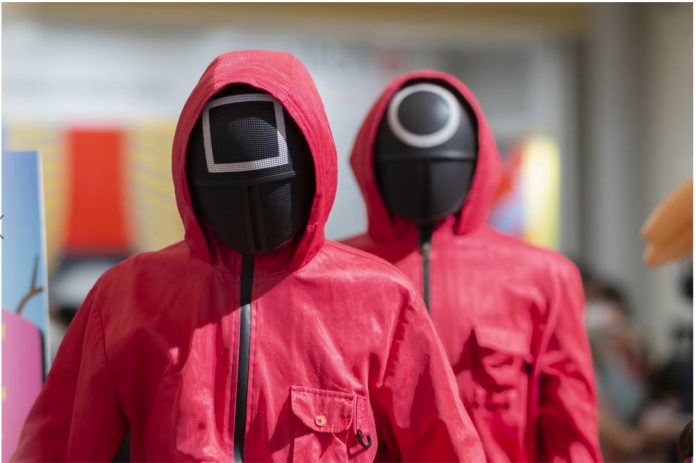 We were going to finish the entire Squid Game series first before saying anything about it to fellow kabayan and OFWs, but later felt that we couldn’t wait before our humble opinions about the runaway worldwide Netflix hit turned into fragile, half-forgotten memories. Why the urgency, readers?

The reason is: there are many similarities and reminders that the adventure of the Squid Game contestant is similar to the journey of the OFW.

Desperation.
Let me explain first the difference as well as the similarity. Many OFWs have completed a basic course, an apprenticeship, or picked up some experience before embarking on a job abroad. They’ve prepared a good part of their adult lives for this and are aware of the risks and rewards involved. For them it is a calculated risk and on balance it’s worth it.

The contestants in Squid Game are almost 100% deeply in debt, have little or no way out of their indebtedness and have nothing to lose by trying out for the Games, except (perhaps unknowingly) their lives. For most of them, living the reality of their financially compromised lives is probably not worth living and as one of the early episodes shows, knowing what the consequence of failure were would ultimately not deter them from joining.

OFWs and migrants certainly aren’t anywhere near the level of desperation of the Game, but when you think about it, a lot rides on that one job that the kabayan signs up for: the money borrowed for the placement and the travel expense, the immediate and long-term future of the family that the OFW has almost surely started and committed to support and the pride and expectations of friends and family that our guest worker/migrant cannot let down without great shame and disappointment.

There’s certainly a lot of drama in the TV show, but when you put the stakes side-by-side, is the desperation really that different?

Rewards of success/cost of failure.
Again, initially the difference is so great as to almost laugh at the comparison. Life or death versus earning dollars? Getting your brains blown out versus living for one plus years away from your family?

Hardly comparable.
But when the viewer pauses to really really think about it, the contrasts start to dissolve: in return for a few years of hard work the kabayan worker earns triple, quadruple, up to ten times the amount in whatever job he or she would’ve worked in for an equivalent amount of time back home.

This enhanced income provides enhanced shelter, basic needs and a standard of living that the previous generation could only dream about and if the fruits of your labour are invested responsibly, extend well beyond the present generation.

On the other side of the coin, the costs of failure don’t look pretty. Going back home with little to show for it, going back to zero and having to face family and friends asking the question: with everything going for you, what went wrong?

Yes, the Squid Game winner would become a multi-millionaire, winning in Korean currency the equivalent of US$38 million, but considering that only one out of nearly 500 contestants will make it and that each game is literally a life-or-death situation, the rewards really aren’t that great.

Really, can you quantify or put into monetary terms the most priceless thing there is, human life itself?

Conclusion: The reward-or-punishment situation, although in different worlds, is about the same. Sky high rewards, but terrible costs.

High learning curve, learning on the fly. In the Game the contestants need to learn in the blink of an eye what the game is all about, how to avoid catastrophe and how to achieve the goal. Every step is not only learning, but gaining on your fellow contestants and getting one step closer to the objective.

You must not only be fast, but also be decisive, in short perfect in planning and execution. All this in a hostile, unfamiliar environment.

Many of our kabayan around the world are thrown into strange lands where no English is spoken. The culture and language, not to mention the weather, way of doing things and even work habits are all new to them. The need to adapt and do well is constant and ever-changing and to survive means adjusting all the time.

This is why it is easy to relate for the OFW/migrant watching Squid Game. Each world, in its own way, mirrors the other.

As we mentioned earlier, we haven’t finished watching the whole series. We’ve heard a spoiler here and there, but overall it doesn’t detract from our enjoyment: we know it will still be a visual delight, and more importantly, a beautiful story to watch.

Thanks for reading, mabuhay!