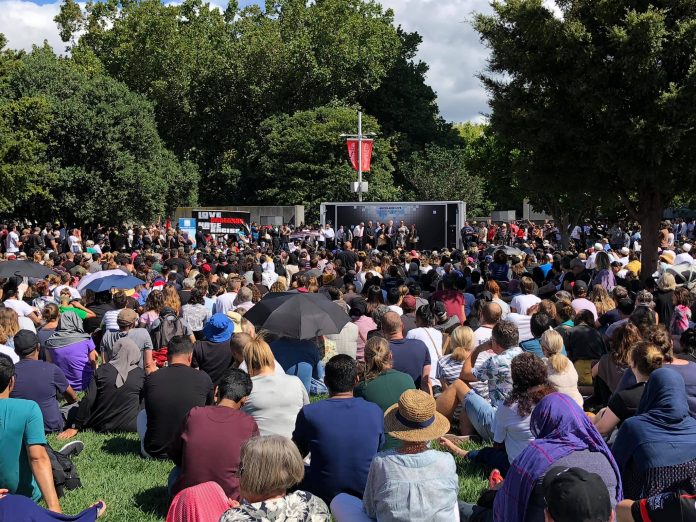 What has happened in Christchurch is an extraordinary act of unprecedented violence. It has no place in New Zealand. Many of those affected will be members of our migrant communities – New Zealand is their home – they are us. – (New Zealand’s Prime Minister Jacinda Arden)

DON’T LET THIS INCIDENT CHANGE YOUR OPINION ABOUT NEW ZEALAND

Migrante Aotearoa has condemned the violent attack against Muslim brothers in Christchurch. “Reports of death rose to 49 and several injured are still being treated at this stage,” says Mikee Santos, Chairperson of Migrant Aotearoa. “No official information on the casualties’ nationalities have been yet released but we have not received any report that a Filipino was hurt after the incident.

“We are calling on our fellow Filipinos to follow the NZ Police advise on security measures but should not let this incident take over the reality that New Zealand is a peaceful and loving nation.

“Prime Minister Jacinda Arden stated that these right wing extremists are trying to destroy New Zealand because of our diversity and rejection of racism but they will not win.

“Filipinos unite with all justice and peace-loving New Zealanders in pledge to uphold our values of kindness and compassion. We urge everyone to stay safe and vigilant as we join the cries for justice during this difficult time. Be observant and report to authority any incident or person acting out of the norm within or around our areas. We condemn in strongest terms the hate and violence brought by right wing extremists. We are offering our prayers and condolences to our Muslim brothers and sisters and to all the victims of this tragic event.”

CHRISTCHURCH MUSLIMS IN GRIEF AND SHOCK

A member of the Muslim community in Christchurch says the Muslims in the city are in a shock.

Hedayat Najib, head of Business Studies at the Abacus Institute of Studies in Christchurch, says he and his family have been in contact with friends and families.

But they could not make any direct contact with friends who had been shot but survived the shooting, he says.

“I have just made contact with one of our friends who was shot. He is alive and I am heading to the hospital now.

“A friend sent a text just after the attack saying he was injured but communications via text has been difficult.

“My family was immediately thrown into shock and are very scared. My wife Nilab was shaking all night. Our kids were scared and we all slept in the same room locking every door to assure my kids of their safety.

“When I heard the news of Haji Dawood Nabi, whom I have always called uncle, I had to leave the room to cry as we did not want our kids get further distressed.

“The atmosphere in the community is that we are all in a state of grief and, at the same time, in shock. We wonder just how such an event can happen in Christchurch, what we call heaven on earth.

“Saying all this, our mindsets towards our shared home (New Zealand) and our other Kiwi brothers and sisters will not change.

“We are all Kiwis and we will stand taller and stronger than before, to combat terrorist. This cancer, which is terrorism, in today’s world does not have religion or colour.

“We need to stand united together and will defy terrorism together by engaging, communicating and embracing each others values’ and contributions.

“The people who commit such atrocities are just criminals who are scared of difference and diversity,” Najib says.

He was an Afghan refugee and came to Christchurch Afghanistan as a teenager. He has a post graduate masters degree from the University of Canterbury.

Najib says his life changed in the early 1990s when the warlords broke into Kabul, the capital of Afghanistan. During the factional fighting that followed many atrocities were committed and about 60,000 Kabulis were killed.

NZ SHOULD NOT BE SURPRISED AT WHAT HAPPENED IN CHRISTCHURCH

The Chair of the Superdiversity Institute for Law Policy and Business, New Zealand Asian Leaders, SUPERdiverse Women and Managing Partner of Chen Palmer Partners, Mai Chen said that New Zealand should not be surprised at what has happened in Christchurch.

“I am immensely saddened by this grotesque display of violent racism and intolerance but we are not immune from racist, hate attacks here. New Zealand has a very high ranking in the Global Peace index, but we can take nothing for granted.”

“Some New Zealanders of different ethnicities experience racism in this country every day and it is not alright.”

“As the superdiversity of our country continues to increase, the challenges of melding a population of over 200 different ethnicities needs to be carefully thought about and worked on.”

“I cannot imagine the vulnerability and grief the Muslim community is experiencing now. They did nothing wrong. Yet they have been killed and injured.”

“The only hope from this terrible situation is the universal condemnation and outrage at what has happened. This confirms the pride we feel in calling New Zealand home because of the shared value of respect and dignity for every person regardless of colour, race and religion.”

“New Zealanders need to continue to strengthen a culture which condemns the racism faced by ethnic minorities and refugees just because of their different culture, language and religion. The migrant and refugee community will continue to be committed kiwis contributing to this country.”

“Our thoughts and prayers are with the families and friends of the victims.”

From veterinary surgeon to regional trainer

In the battle of the egos, who wins?