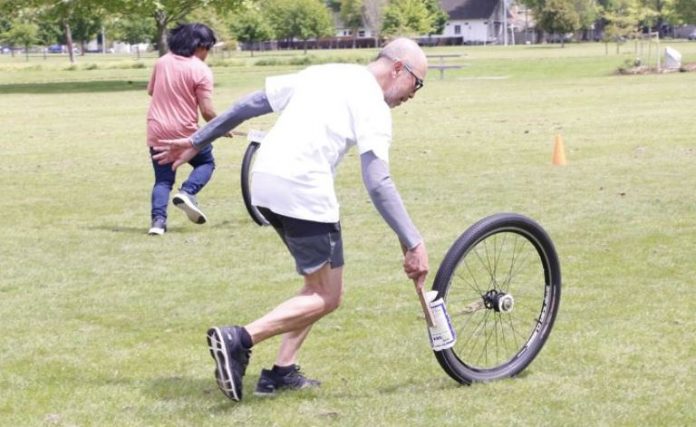 HAMILTON – It was a fun weekend on Oct. 24 among 200-plus Filipinos in the Waikato region of New Zealand as they congregated in Hamilton City’s scenic Claudelands Park on what was predicted to be a rainy day. But not a single drop of rain disrupted the merriment of the participants of all ages who attended LingawDuwa LarongPinoy, an event that I’ve organized since 2013.

Dubbed as the Filipino Sporting Event of the Year, the gathering features Pinoy street games – patintero/tubig-tubig, siatong, tumba preso/batolata, kariling, sipa/takyan, dama and sungka. Both young and old were engaged in the games. To the former, this was a time of discovery, while for the latter, a time to reminisce.

The teams carried such names as Tribu Bola-bola, Tribu Guapohon, Tribu KaBol-anoNZ and Tribu Halo-halo. The event, hosted by the Waikato Filipino Association, attracted the attention of the regional newspaper, the Waikato Times, that put up a lengthy feature in its e-publication and a whole page of photos in its paper edition two days later.

Hamilton City mayor Paula Southgate not only graced the activities, she also participated in patintero and played sungka. Members of Parliament David Bennett (National) and Jamie Strange (Labour) dropped by, mingled with the crowd and witnessed some of the games.

I was asked both by media and the guests about the games and came to realize the creativity and resourcefulness of those who invented these games. I told them that we made do with what limited resources we had – sticks, a can, slippers, used tires – and still had a lot of fun.

I guess that is the reason baseball did not flourish much in the Philippines as this requires gloves and equipment. Basketball, on the other hand, needs only a ball, a vacant lot and a goal, making it accessible to all. But the main reason I keep organizing LingawDuwa is the togetherness of Filipinos, who for a moment can take a break from the demanding life overseas.

You do everything – house chores, shopping, bringing the children to school, etc. Plus thinking about your loved ones in the Philippines and sending financial support, especially during emergency situations. And yes, for those on temporary visas, there is the prospect of returning home and being unemployed.
I must say that one of the most exciting contests was takyan, where surprisingly all the competitors were fast and skilled. Tribu Bola-bola took home the championship trophy.

Though they didn’t end up as winners, most of the members of Tribu KaBol-anoNZ got their photos in the news not only with their attractive ‘kinumpay’ tribe colour, but also because of their camp’s fiesta atmosphere that even had a lechon for lunch.

All left the event with a smile, even the food vendors who sold out their best Filipino dishes that delighted both the Filipinos present and the people of other ethnicities who dropped by.

For a day we filled Aotearoa with laughter, fun and shouts of “Mabuhay!”
.

What are the symptoms of the coronavirus?