August is celebrated in the Philippines as Buwan ng Wika (language month). The Philippine Embassy in New Zealand launched its celebration with Filipino OPM songs beautifully rendered by Melodika – a NZ band who sing in Filipino.

If you understood any of the words or phrases I used, chances are that you know they come from the Filipino language.

Filipino, or Wikang Filipino, sometimes referred to as Pilipino, is designated as the Official Language of the Philippines, together with English. We can say that Filipino is the ‘standardized’ version of Tagalog. Tagalog is the language used primarily by the people from the ‘Tagalog’ region. The Tagalog region covers the provinces of Bulacan, parts of Nueva Ecija, Cavite, Rizal, Bataan, Quezon, Batangas, Aurora, Marinduque, Mindoro, parts of Camarines Norte and Northern Palawan. And of course, the National Capital Region or Metro Manila.

Since 1987, a year after the so-called People Power Revolution, the Philippine Constitution has mandated that Tagalog is to be adopted as the one and only Official Language among the many available languages in the archipelago of one thousand seven hundred plus islands.

Let’s go back further in our Philippine history. During the American colonial period, back in the 1930s, Spanish and English were considered ‘official languages’. A ‘national language’ for the Philippines did not exist. This was to be addressed at the first National Assembly of the Philippine Commonwealth on November 13, 1936. This assembly created the Institute of National Language (INL), which was later named Surian ng Wikang Pambansa. 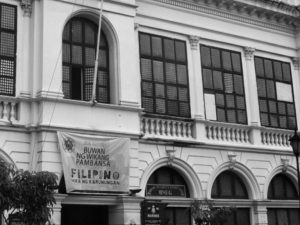 As an institution it was tasked to study and look at the existing native languages which, hopefully, could be the base line for a national language. It’s hard to imagine how the game of backchanneling and politicking played out. I’m sure that there were groups and lobbyists, before the term was invented, to push for their agendas. I remember one of my professors in Sociology in college saying “we are regionalist before we are nationalist”.

To be fair and give everyone a chance, President Manuel L. Quezon (yes he was the president during this time) appointed representatives for each major regional language to form the INL. Remember the names and you’ll have a bit of an idea of the scenario leading up to the adoption of the national language. Led by Jaime C. De Veyra, who sat as the chair of the Institute and as the representative of Samar-Leyte-Visayans, the Institute’s members were composed of: Santiago A. Fonacier (representing the Ilokano-speaking regions), Filemon Sotto (the Cebu-Visayans), Casimiro Perfecto (the Bikolanos), Felix S. Sales Rodriguez (the Panay-Visayans), Hadji Butu (the languages of Muslim Filipinos) and Cecilio Lopez (the Tagalogs).

From then on, several inclusions were added to the language, to the alphabet and to the Filipino dictionary. We have the Komisyon sa Wikang Filipino or the Filipino Language Commission, which leads in the promotion of the Filipino language, its correction and its sustained relevance in the times of globalization.

Much like any modern language, Filipino is alive! It is changing and adapting to the times. Ever heard of the Ga-talk? Where you interject the syllable “ga” in a patterned format in a sentence? Or the several slang words that come out of each generation? The Jeproks vocabs during the time of the Juan de la Cruz band? The ‘Gamol’ days of the late 1980s to the early 1990s? And of course the Internet talk Pinoy style?

As a Filipino, whether you’re full-blooded, half, a third or a fourth, married to or born into, you are in a great situation to continue using this language and to promote the ideals of our heritage. Like I always say in my middle school classes. “We want to promote national identity and the love of our country? Let’s get to know the Philippines. Let’s start with Filipino, our national language. The main mode of enculturation is through the language, mag-aral tayo ng wikang Filipino.”

And because of this I created and started a YouTube playlist called ‘All About Filipino’. In there you can find videos that talk about Philippine history, heroes and of course, Filipino language lessons. As of July 2021 we have seven lessons on Learn Filipino with Coach Francis. From learning how to say your name in Filipino, to asking about someone with “Kumusta?” and “San’ punta mo?”, you can also find out how to use pronouns like “ako, ikaw, siya at sila”.

Here is my playlist link to All About Filipino: https://youtube.com/playlistlist=PL0rpwL6HPCJRmvbLg4pb9HUtzTvEWUcPZ

Join me there as I continue on this journey to reach out to the universe and to promote love for the Philippines. It’s your job too.

Restaurateurs based at MIQ hotel going to court after business ‘just...