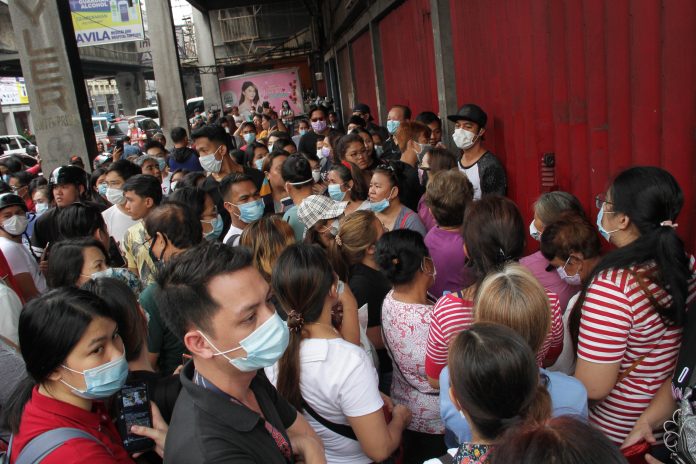 MANILA – To prevent the spread of the novel coronavirus (2019-nCoV) in the country, President Rodrigo Duterte’s temporary travel ban on visitors has been extended to include any part of China and its Special Administrative Regions – Hong Kong and Macao.

On January 31, Duterte issued a temporary travel ban that only prohibited visitors from Wuhan City and the entire Hubei province in China, the epicenter of the deadly virus.

In a statement, Presidential Spokesperson Salvador Panelo said Duterte extended the ban’s coverage upon recommendation of the Inter-agency Task Force for the Management of Emerging Infectious Diseases.

A few moments after the temporary travel ban was extended, the Department of Health (DOH) confirmed a second case of nCoV, a 44-year-old Chinese man who died on February 1.

The temporary travel ban covers all visitors, regardless of nationality, coming from any part of China, Hong Kong, and Macao.

“For clarity the ban is on the person of any nationality except that of Filipinos particularly specified above, coming directly from the places above-mentioned and arriving in the Philippines, and not of any flight,” the directive read.

In a separate statement, Duterte’s former aide, Senator Christopher “Bong” Go, also emphasized that the ban does not “single out” Chinese nationals as it covers all visitors regardless of nationality, except Filipinos.

“This order covers all travelers from China to the Philippines, regardless of nationality. We empathize with China given what they are going through but we are doing this to protect the country and its people. The Philippine government is committed to help China and other affected countries address this worldwide health concern,” Go said.

The temporary travel ban also covers all visitors, except Filipino citizens and holders of permanent resident visa issued by the Philippine government, who, within 14 days immediately preceding arrival in the Philippines, has been to China, Hong Kong, and Macao.

Filipinos and permanent resident visa holders coming from any place in China, Hong Kong, and Macao who wish to enter the Philippines, however, need to undergo a mandatory 14-day quarantine.

Filipinos are also banned from travelling to China, Hong Kong, and Macao.

Duterte ordered the establishment of a repatriation and quarantine facility.

He will be also presiding the next meeting of the Task Force on Monday, which will be attended by other concerned agencies.

All heads of departments, agencies, offices, and the like were directed to adopt, coordinate and implement guidelines issued by the task force until the threat is over, Panelo said.

The Armed Forces of the Philippines (AFP), the Philippine National Police (PNP), and law enforcement agencies are all on standby and have been directed to give the necessary assistance to ensure the implementation of this directive to ensure the safety and well-being of everyone, he added.

Panelo also said the President also gave the Task Force the authority, if necessary, to ban the entry of travelers from other areas with confirmed 2019-nCoV.

The Palace official, meanwhile, assured all Filipinos that the President’s directives and protocols being implemented will last until the danger of the dreaded disease has ceased.

Citing the DOH, Panelo urged the public to strictly observe strictly the measures on personal hygiene like regularly washing the hands and wearing surgical masks when going around crowded areas when one has coughs and colds or has a fever.

Reports showed that nCoV has killed 259 people in China and has infected thousands of others.

The World Health Organization (WHO) has declared the nCoV outbreak a “public health emergency of international concern” on January 30.

Effective immediately until 29 February 2020, Philippine Airlines will be cancelling all flights between Manila and the following points in greater China: BEIJING, HONG KONG, GUANGZHOU,
SHANGHAI, XIAMEN, QUANZHOU (JINJIANG) AND MACAU.
The directive likewise bans Filipinos from traveling to mainland China and its SARs, and requires a 14-day home-quarantine for Filipinos and Permanent Resident Visa holders who come from mainland China and its SARs. Our all-Filipino flight and cabin crew members are likewise included in this ban.
Affected passengers may refund their tickets with service fees waived.
Otherwise, passengers may rebook your journey, with rebooking service fees waived, once the travel bans are lifted and flights are reinstated to and from mainland China, Hong Kong and Macau.
(supplied)