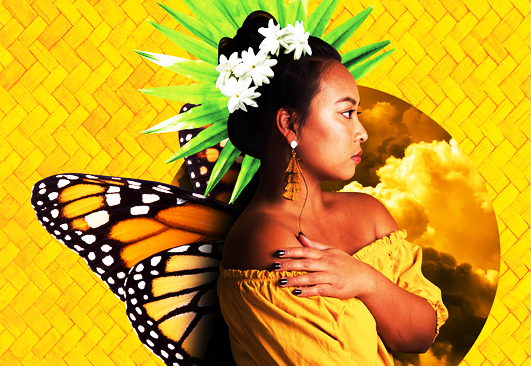 This play brings Pinoy pride on stage – depicting the joys, tears and laughter of every Filipino migrant in New Zealand.

AUCKLAND – It has been a long time coming – Auckland’s first Filipino-Kiwi play.

Whereas in Australia – granted it has a bigger talent pool in proportion to it’s huge Filipino community – there are many prolific Pinoy playwrights, including Manny G. Asuncion, who wrote 7 plays. As you would expect Filipino-Australian plays have been wowing audiences there for decades.

It is billed as “an explosive, moving and joyous romp shaking the foundations of Filipino and Kiwi culture.” And it will run from 13-24 August at the Basement Theatre in Auckland (book at iticket.co.nz).

It was a delight listening to Marianne talk about the storyline, the big themes for the play and the journey to finally bring it to fruition.

Firstly a word about her credentials. Marianne gained a Bachelor of Performing and Screen Arts degree graduating from Unitec in 2016. She was the 2019 Auckland Theatre Awards Out-standing Newcomer winner.

“The motivation to write a Filipino-Kiwi play started after I left drama school but deciding to commit to writing the play took some time. Fortunately I found my feet with the Proudly Asian Theatre Company.”

We gather that the play is a semi-autobiographical tale about migration and assimilation in an adopted country. By the way, Marianne moved to Christchurch from the Philippines when she was 11. (She recently relocated to Auckland).

What was the inspiration for this play? “I was inspired by my confusion of who I was, who I have become and the desire to understand what my mana is. I’m inspired by my family, both blood and the whanau that chose me,” says Marianne.

She has the lead role in the play – cast as Alex. According to Donna Dacuno Dacuno, who joins the cast as Alex’s fierce yet warm mother
‘Mariella’: “PINAY is a grounded migrant’s autobiographical tale from the point-of-view of the up-rooted children.

“It reveals familial intricacies that should be more often verbalised, heard, acknowledged and negotiated. It also displays some of the
funny and annoying Filipino migration realities that make it such a relatable family journey.

“PINAY brings back memories and grounding of my Filipino upbringing. I probably lived, witnessed and rebelled against some of the PINAY themes back in the Philippines.

“For me, the character of Mariella provides us with a glimpse of a typical post-Maria Clara matriarch – strong female in the classic
Filipino middle-class roles of Anak (daughter), Tita (aunt), Ate (sister), and Mama (mom) in one.”

On writing the piece, Marianne Infante says: “It’s more than just wanting to see Pinoys being represented and celebrated in the landscape of Aotearoa New Zealand.

“It’s the cathartic exploration of what it means to belong and assimilate in Aotearoa as an intersectional Filipina migrant.”

Basement Theatre Programming Director Gabrielle Vincent says “We are super excited about the talent of Marianne Infante and her new work PINAY.”

Finally we asked Marianne – what excites her most about this play? “What excites me the most about my play happening is the fact that I
and my friends finally get to share, represent and celebrate my culture in, and with, Aotearoa.”

Many calls for change in beauty industry